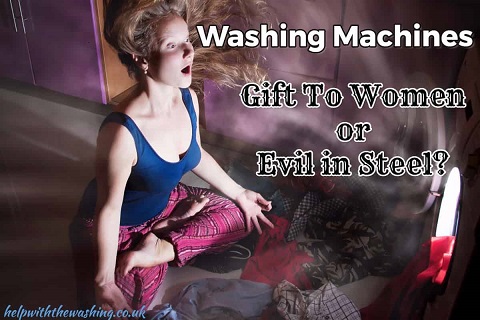 Has the washing machine had as much impact on society as the internet? Or is it an invention that has made women more miserable than ever?

These opposing viewpoints are from a rather interesting debate that I'm sure you'll want to know more about. Be warned though, there are some colourful characters and strong opinions to follow!

(I say “Colourful” and “Strong” as this is a family-friendly blog...)

Let's examine both sides of the argument and then I'll give my own thoughts on the discussion. You are welcome to add yours in the comments!

The argument in a nutshell

The side lauding the invention of the washing machine points out that historically, laundry was a very time-consuming task. Liberated from the burden of laundry, women were able to study or to go out and seek work.

Finally, women were started to be perceived as equals to men.

The other side claims that it was precisely this liberation that has led to women being more miserable than ever.

No longer holding the traditional role of housekeeper has apparently left women feeling unfulfilled and having to cope with the pressurised world of work – which we were not designed for.

Is the washing machine an instrument of unhappiness? Milo Yiannopoulos is a conservative political commentator and a critic of feminism. An openly-gay Brit in America, he revels in causing controversy.

Milo believes that there is a direct link between the invention of the washing machine and the unhappiness of women.

What is the basis for this claim? He references a paper issued in 2009 titled “The Paradox of Declining Female Happiness”. The paper states that women are unhappier today than they were in the 1970s. Yiannopoulos has linked this to the rise of washing machines in households.

Yiannopoulos believes that the feminist movement humiliates those who choose to stay at home and raise children. Thus, women are thrust into a world where they don’t want to be.

Milo believes that staying at home is:​

“one of the most important things a woman can do with her life and may be one of the only things women can do better than men.”

The comments made by Yiannopoulos are very inflammatory to women. In particular, to those who are proud to be able to provide financially for their family.

Is it fair to use this paper to tie female unhappiness with the invention of the washing machine?

If we question whether women felt empowered enough to accurately answer the historically surveys on happiness, or the similar low rates of male happiness we could come to dispute this claim.

Of course, the washing machine hasn’t been the only change introduced into the lives of women since the 1970s.

The introduction of contraception led to more sex outside of marriage. Greater societal acceptance of divorce has made it more common. Social media has made it easier to compare lives with others. All of these things could have contributed to the decline of happiness among women.

The paper presents the results of a study that looked at what women viewed as important to them. When comparing to men, women place more importance on being able to find steady work and being successful in their line of work compared to men.

There is still gender inequality within companies when it comes to hiring and paying employees. Maybe this has contributed to the growing unhappiness of women?

It’s also worth noting that the paper focuses on women living in the United States. Not all women around the world have access to a washing machine. The majority of the world is still forced to wash by hand; a laborious and time-consuming task.

Or are they really metal saviours?

Historically, women have been responsible for the washing of the household’s clothes. Depending on where in the world they lived and in what time, this could involve long walks to a water source, operating dangerous machinery such as a mangle, and a lot of heavy lifting.

The disadvantages of hand-washing

A study found, in a slum in Peru, that women spend 18 hours a week doing laundry. While she is doing laundry, she is unable to do other productive activities such as earn an income.

Handwashing can be harder on clothes as they need manual scrubbing. This means they need replacing more often. Replacing clothes can be a heavy burden on a family that is on a low income.

Transporting water, scrubbing clothes, and wringing excess water from fabric can be demanding. Many people suffer from chronic back pain, dry hands, and sore joints.

If the women who currently walk hours a day to get water, scrubs clothes until her joints hurt, and has to repeat this many times a week was offered a washing machine – would her happiness increase or decrease?

The washing machine has undoubtedly improved the lives of those who had to wash by hand. There are still millions of people who are yet to benefit from this technology.

The question of whether the washing machine has saved time and reduced pain for millions is easy to answer: yes!

One argument as to why women are not happier is that they now have extra burdens. Not only are they expected to go out and work, but they are also expected to continue to look after the house. The world may now expect women to work, but does it expect men to do more housework?

For us, the question of whether the washing machine is directly responsible for the declining happiness of women over the past 50 years in the Western world is hard to answer. Yiannopoulos’ claims are tenuous and very speculative.

Remember, this is a guy who once said:

"Gay rights have made us dumber" - Milo Yiannopoulos

It's introduction was the turning point of a huge cultural shift. By women having the time to work, they no longer had to rely on provision from men; they could create their own life.

Can you imagine your life without a washing machine?
Do you think you would be happier without one?
Let us know your opinion in the comments section below. We would love to know!