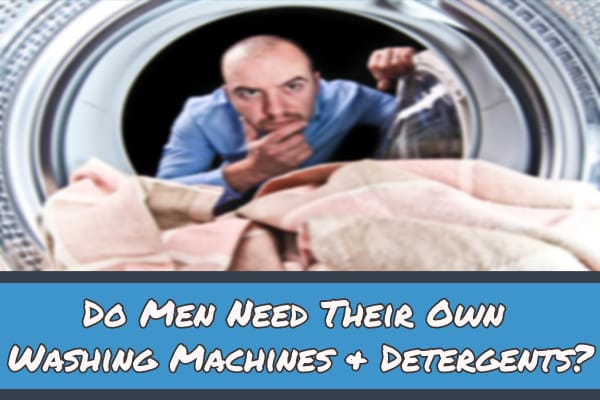 The battle of the sexes has produced a new, rather surprising battleground - washing machines and detergents!

Men are now feeling the pressure to contribute to the upkeep of the household.This has led to reports of men being left baffled by the appliance.

Whether it is simply a ploy to shirk the chore or not, suggestions have been made for making washing machines easier to understand.

Some entrepreneurial start-ups have started to create washing detergents targeted at men with more “manly” scents.

​Are men as clueless about ​washing machines as statistics say?

​The Daily Mail published a controversial article in 2013 that quotes statistics from washing machine manufacturer, Indesit.

Indesit's research in Britain and found that:

​The article did prompt some backlash at the time.​

Both males and females complained that the report and statistics came across as patronising towards men.

In addition to this, many were questioning how impartial research published by a washing machine manufacturer could be. At the time, Indesit were ​promoting a "We pick up, wash and deliver!" service.

​It’s easy to sympathise with the supposed 40% of young male adults that are unsure about which button(s) to press.

After all, most washing machines come with at least 10-15 programmes built-in, let alone the ability to change the temperature and adjust the spin speed!

​Peter Fabor, a ​designer frustrated with the complexity of washing machines, pleaded to the giant manufacturers such as BOSCH, Whirlpool, and Samsung to simplify washing machine user interfaces. " I’m sure these fancy symbols were created during some hard party of KOENIC product designers. Because nobody else can understand them."​

(KOENIC is a German manufacturer, but the point raised about confusing washing machines symbols is a good one!)

Peter's article apparently struck a chord as it was later translated into three other languages and shared widely. Although he never got a response,  he took matters into his own hands and “hacked” his communal washing machine with stickers. ​There is also the argument that females don't understand the full extent of the washing machine's capabilities either.

However, both males and females are more than capable of reading the instruction manual to learn how to operate it properly (providing it's not in German or Chinese!)

​This anecdotal evidence is contrary to ​the one the ​the Advertising Standard Agency (ASA) took it 2017.

​The organisation has banned adverts that:

"...objectify, sexualise or mock people for not conforming to stereotypes".
​
​As this article from Gizmodo points out, that includes the incompetent father figure struggling to use a washing machine.
​
​Still, advertising has long pushed ideals that do not mirror real life. Is this really a "stereotype" or a true reflection of British men?

​It seems like there is an app for everything these days, and washing machines haven’t been left out.

Some ‘smart’ washing machines can connect to your wifi network, allowing you to control the device from your phone.

The technology is still in its infancy, meaning that these smart washing machines are costly. Naturally, they will become more affordable over time.

Before long, we’ll be choosing our washing cycle and starting a wash whether we’re at home, on the train, or in the office!

Some of the apps also assist in choosing the right programme for your laundry by asking for information such as the material of the garments and the max temperature indicated by the care label.

Although technology can help us make use of the other 13 programmes on the washing machine, instead of the standard 2 or 3 ones chosen out of habit, unfortunately, we still have to pick up, sort, and load the machine!

​​The laundry aisle in a supermarket is full of colour; from shades of blue and green to vibrant in-your-face pink and purple.

There is no doubt that combined with some of the fragrance options such as lavender & jasmine, peony blush, gentle orange and tropical lily, that some of these products have been targeted explicitly towards females.

​Several companies have set up to try and change this. They believe that there is a gap in the market for laundry detergents that are made for men.

The male laundry goods often come in a black bottle and are ​imbued with "manly" scents.

​What is a "Manly Fragrance"

Some of the detergents developed for men have scents such as:

​These scents are all the classic earthy and woody smells commonly used in men's products.

Some claim that these scents can make males more appealing to females. For example, sandalwood reportedly resembles androsterone.

​Androsterone is a pheromone that men secrete in their sweat and can apparently make them appear more attractive to females.

Regardless of whether the science behind the claims stacks up, it’s natural to feel more confident when you feel like you smell good. Confidence can translate into a better sense of well-being and happiness.

​Does it have extra cleaning power?

​Despite the premium price and black packaging with sleek logos, the products don’t boast to offer a superior clean.

One sceptic commented that instead of paying extra for manly detergent, why not just use one of the many unscented existing detergents and add a couple of drops of cologne?

Or, as many people do, just wear clean clothes and apply aftershave

Although the small companies state there is a big gap in the market, no big players have started producing "for men" products. However, this may change in the coming years.

So, do men need their own washing machine and detergents? No. But, would men (and women) prefer a simple, more intuitive washing machine? Quite possibly, and as technology continues to progress, it’ll no doubt that soon our laundry woes will be over.

​Do you think there is a gap in the market for male-only laundry detergent?

Would you buy it if it appeared in your supermarket in the laundry aisle?

Or how about simpler washing machines - do you think​ they're needed?

Let us know in the comments below!